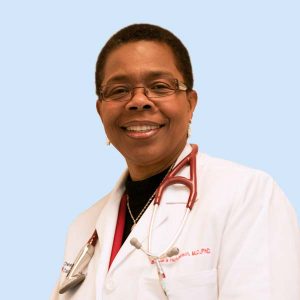 Dr. Barbara Hutchinson, the managing partner of Chesapeake Cardiac Care, is characterized by her warmth, welcoming spirit, and compassionate bedside manner. She is very passionate about caring for people with cardiovascular diseases, which is the leading cause of death in both men and women.

As a well-respected pillar in the cardiovascular medicine community, Dr. Hutchinson has won numerous awards* and recognitions*.

She believes that good health is the cornerstone of progress because without it our future plans may not materialize. She is recognized as a detail-oriented clinician who takes the time to educate her patients on their medical condition, why they need certain tests, and what the follow-up care entails. Her reputation for extraordinary care attracts patients from all over the US, as well as from other countries and continents. She enjoys her job and it is manifested in the way she makes every patient feel special, respected, and comfortable. She listens to her patients’ concerns, answers their questions, and allows them to be a part of their care by helping them to make right choices on a daily basis. Her warm and welcoming nature combined with cutting edge medical care and services has given her an extremely high level of patient satisfaction.

Dr. Hutchinson enjoys dedicating her spare time to helping the community. She volunteers at a clinic for individuals without insurance. She also mentors high school students considering a career in medicine and she allows residents considering cardiology as a specialty to spend time in her practice. In addition, Dr. Hutchinson is a very involved member of her church.

Away from the office, Dr. Hutchinson is an excellent cook, specializing in preparing healthy and tasty meals that do not compromise cardiovascular risk factors. She is also a musician and, being from Trinidad, she plays the steelpan as part of a band.

To know and meet Dr. Hutchinson at Chesapeake Cardiac Care is to experience outstanding evidence-based cardiovascular medical care with confidence, warmth, and efficiency.

Dr. Hutchinson’s passion for cardiology started at a young age as a curiosity about heart disease in her father’s family. She was born in Tobago, West Indies and received her Bachelor of Science degree from the University of the West Indies in Trinidad. Her curiosity about heart disease led her to the United States to pursue a career in cardiovascular disease management. She completed a Ph.D. in Cardiovascular Pharmacology at Howard University before going on to the University of Maryland in Baltimore, where she completed her medical degree, residency in Internal Medicine, and cardiology fellowship. At the University of Maryland she was the first African American to hold the titles of Medical School Class President and Chief Resident in Internal Medicine. After completing her cardiovascular training, she remained on staff briefly before going into private practice in Annapolis, Maryland.

2015 Brava Award given by Smart CEO

2014 Impact Award from the Association of Black Cardiologists

1987 – 1989 Lecturer in Pharmacology
University of District of Columbia, D.C.
Department of Respiratory Therapy

2010-2011 Principal Investigator of a randomized, double-blind Placebo-controlled Parallel group, multinational trial to assess the prevention of Thrombotic events with Ticagrelor compared to placebo on a background of Acetyl Salicylic acid (ASA) therapy in patients with a history of myocardial infarction.

2006-2008 Sub- Investigator in a Double-Blind, Randomized, Placebo-controlled, Multicenter Study to assess the Efficacy and safety of Darbopoetin Alfa Treatment on Mortality and Morbidity in Heart Failure Subjects with symptomatic Left Ventricular Systolic Dysfunction and Anemia.

1993 – 1994 Single-center clinical trial looking at the effect of Ouabain on
blood pressure in healthy subjects.

1988 – 1993 Pharmacology consultant on a health-related literacy in targeted
Population of Blacks and Hispanics at the University of the
District of Columbia.

1988 – 1990 Clinical Research Coordinator of a Multicenter Clinical Trial on
“Parallel evaluation of the hemodynamic effects of 3.75 mg, 15
mg and 30 mg Zofenopril in patients with chronic heart failure”
at Howard University Hospital.

2012-2020 Board Member of the Association of Black Cardiologists

Font Resize
Contrast
Accessibility by WAH
Call Us Text Us